This award, now in its sixteenth year, acknowledges a woman who has distinguished themselves in the field of Hudson Valley history.

It is presented at a program during Women’s History Month in March. Washington’s Headquarters is now accepting nominations for women that are dedicated to sharing and preserving history, conducts research, teaches, or supports historic landmarks. END_OF_DOCUMENT_TOKEN_TO_BE_REPLACED In 1850, after the State of New York took possession of the Hasbrouck House for back taxes. Eli Hasbrouck appeared in various publications directly related to his cultivation of grapes. He grew what he called the Anna Grape in his garden. It was prized as a variety because it was free from rot. Eli was drawn to the grape because of it color. A.J. Downing thought highly of it. It was said about the grape, “the raisins had the sweet rich flavor and aroma of those from the Muscat of Alexandria.”

Eli married again in 1855; the same year his brother Jonathan died. He married Margaret Van Wyck, of Fishkill, on February 13. The same time period he re-married, Eli was listed in the census as being worth $18,000. His occupation recorded as “gentleman.” Eli was in fact a merchant and farmer. Where Eli lived during this time was listed in business directories as 167 Liberty Street in Newburgh. In addition to his large family, his sister Mary also lived with the family until her death in 1856. END_OF_DOCUMENT_TOKEN_TO_BE_REPLACED Jonathan Hasbrouck III will forever be known as the Hasbrouck who lost the “Old-Headquarters” home (Washington’s Headquarters in 1782-1783) in Newburgh by foreclosure. The State of New York took control of the home and in 1850 made it the first publicly owned historic site in the nation.

Jonathan Hasbrouck III hoped to save it the home from foreclosure, and even proposed a monument on the grounds over four decades before the current Tower of Victory was erected. Today, that tower is in desperate need of restoration. END_OF_DOCUMENT_TOKEN_TO_BE_REPLACED Depending on where you are or who you talk to, the third Monday in February represents either Presidents’ Day or Washington’s Birthday. At three Revolutionary War historic sites in the Hudson Valley, the day is part of a three-day celebration of George Washington.

The Friends of the State Historic Sites of the Hudson Highlands (FSHSHH) have created an inclusive schedule to the array of activities taking place at Washington’s Headquarters, Knox’s Headquarters, and the New Windsor Cantonment State Historic Sites on February 14th, 15th, and 16th. Each day offers something new. END_OF_DOCUMENT_TOKEN_TO_BE_REPLACED

The Annual Meeting of the Historical Society of Newburgh Bay and Highlands will take place on Sunday, October 19th starting at 3:00 P.M. at their headquarters, the 1830 Captain David Crawford House in Newburgh. Members of the Board of Managers are to come together to review 2014.

Following the meeting a panel organized by Society member Tom Kneiser will discuss local buildings they have remodeled for vibrant new uses. END_OF_DOCUMENT_TOKEN_TO_BE_REPLACED General Washington loved horses. In fact he loved to go for rides on his favorite mount whenever possible. The story told to me, after a lecture, involved General Washington, Col. Hasbrouck and Hasbrouck’s sons. They would sometimes go horseback riding together. A favorite stop was the vast Hasbrouck family orchards. Washington, the story goes, loved peaches. Hasbrouck, his sons, and Washington spent hours picking peaches. When enough peaches were picked the Hasbroucks and Washington delighted in feasting on them. This story is obviously false for one simple reason; Colonel Jonathan Hasbrouck had died in 1780. END_OF_DOCUMENT_TOKEN_TO_BE_REPLACED A new book by Dave Richards, Swords in Their Hands: George Washington and the Newburgh Conspiracy (Pisgah Press, 2014) is being hailed as the first book-length account of a plot that can be described as the closest thing to a coup that the United States has ever experienced.

In late 1782, many Revolutionary War officers in the Hudson Highlands had grown angry and frustrated that they had not been paid—for months or even years. With victory in sight, they feared they might never get their back pay and promised pensions, because the Continental Congress, meeting in Philadelphia under the Articles of Confederation, had no authority to raise money. Nationalists wanted Congress to have direct taxation authority, while their opponents insisted that only individual states should have that power. END_OF_DOCUMENT_TOKEN_TO_BE_REPLACED This award is given each year in honor of Martha Washington, a perennially outstanding woman in history who resided in the Hudson Valley with her husband, General George Washington, during the last days of the Revolutionary War. END_OF_DOCUMENT_TOKEN_TO_BE_REPLACED Knox’s Headquarters in Newburgh and the New Windsor Cantonment State Historic Site will be offering a full schedule of activities for the Presidents’ weekend. New Windsor Cantonment was the final encampment of the northern Continental Army, in 1782-83. Here over 7,000 soldiers and 500 family members endured the winter and prepared for a renewal of the fighting in the spring. Instead peace was proclaimed and after 8 long years of war they returned home.

Knox’s Headquarters, the elegant 1754 combination English and Dutch style home, of the prosperous merchant miller John Ellison, was one of the longest occupied military headquarters of the Revolutionary War. Continental Army Generals, Nathanael Greene, Henry Knox and Horatio Gates used the house as headquarters, during various periods between 1779-1783. END_OF_DOCUMENT_TOKEN_TO_BE_REPLACED 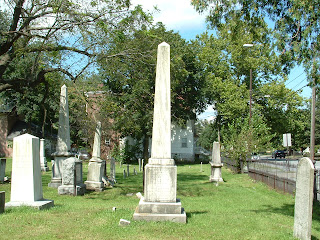 The Old Town Cemetery is situated between Grand, Liberty, and South Streets, where it has sat for over two hundred years. It has borne witness to an ever-changing Newburgh, from a sleepy village to a bustling city. Many people are unaware of this gem in the heart of Newburgh and how close they came to losing it forever, but thanks to concerned citizens in Newburgh, its future is looking brighter. END_OF_DOCUMENT_TOKEN_TO_BE_REPLACED