The National Park Service/National Underground Railroad Network to Freedom (NTF) Conference was held September 11-14, 2019, in Niagara Falls. The title of the conference was “Crossings: Bridging the Authentic Underground Railroad Past to the Present.” The Association for the Study of African American Life and History (ASALH) was a partner. END_OF_DOCUMENT_TOKEN_TO_BE_REPLACED

The award was named after Robert G. Stanton who was sworn in as the National Park Service’s 15th director on August 4, 1997, as the first African American director and the first director to go through the Senate confirmation process.  END_OF_DOCUMENT_TOKEN_TO_BE_REPLACED Registrations are now open for the National Park Service Network to Freedom Underground Railroad Training in Niagara Falls, set for September 11 through 14, 2019.

Each half day of the Thursday and Friday event days will commence with a keynote speaker addressing one of the themes of the training. The keynotes are followed by five best practices or case studies that relate to the theme, and then the audience is further formed into small groups for discussion. END_OF_DOCUMENT_TOKEN_TO_BE_REPLACED When the fugitive William Lyon MacKenzie arrived in Buffalo Dec. 11, 1837, both the Lake Erie city and the United States were at the dawn of great expansion. The Erie Canal had been completed a decade earlier, and Buffalo was now the gateway for western migration.

There also was talk of expansion to the nation’s south. Just a year earlier, American frontiersmen had taken up arms and carved the Republic of Texas out of Mexico Could northern expansion also be part of America’s destiny? If not expansion, could Americans at least help their neighbors throw off the last English claim on North America? END_OF_DOCUMENT_TOKEN_TO_BE_REPLACED

Network to Freedom’s annual Underground Railroad training has been set for September 11-14th, in Niagara falls. The many controversies that surrounded Robert Moses during his long career as New York’s “Master Builder” were sharpened by his long battle with Jane Jacobs and by Robert Caro’s 1974 biography, The Power Broker: Robert Moses and the Fall of New York (1974).

But his least contentious achievements are also the most unknown: the construction of the New York Power Authority’s hydroelectric plants along the St. Lawrence and Niagara Rivers. END_OF_DOCUMENT_TOKEN_TO_BE_REPLACED 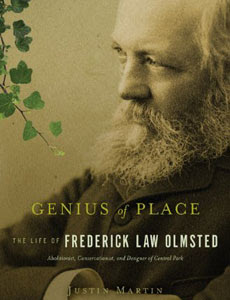 Da Capo Press has recently published Genius of Place: The Life of Frederick Law Olmsted by Justin Martin, the author of biographies of Alan Greenspan and Ralph Nader.

Frederick Law Olmsted is arguably the most important historical figure that the average American knows the least about. Best remembered for his landscape architecture, Olmsted was also an influential journalist, early voice for the environment, and abolitionist credited with helping dissuade England from joining the South in the Civil War.

Frederick Law Olmsted is best remembered as the pioneer of landscape architecture in the United States. From the US Capitol grounds and Boston’s Emerald Necklace to Stanford University’s campus and New York’s Central Park, Olmsted was an artist who painted with lakes, shrubs, and wooded slopes. His stature and importance as an architect has been paramount in previous biographies, but his role as a social visionary, activist, and reformer has been frequently overlooked until now.

Justin Martin’s research shows Olmsted’s life to be a striking blend of high achievement, prodigious energy, and personal tragedy. He played a crucial role in the early efforts to preserve Yosemite and Niagara Falls, and designed Boston’s Back Bay Fens not only as a park, but also as America’s first wetlands restoration. As a former sailor, scientific farmer, and failed gold-miner, Olmsted brought wildly varied experiences to his works and career. His personal achievements were shadowed however by misfortune — a strained marriage, tense family life, and psychiatric institutionalization.

Olmsted accomplished more than most people could in three lifetimes. As a park maker, environmentalist, and abolitionist he helped shape modern America. At a time when open space is at a premium, he’s left a green legacy in city after city across North America. His early understanding of our need for open spaces, as well as spiritual and physical restoration in nature, has been a significant motivator for generations of environmental conservationists since. 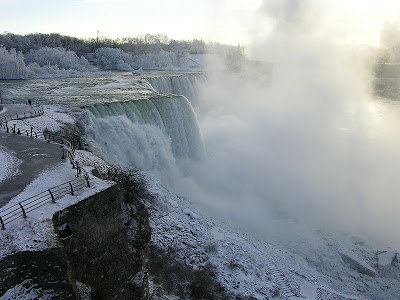 The nation’s oldest state park, Niagara Falls State Park, celebrated its 125th Anniversary this week with a concert by the Buffalo Philharmonic Orchestra on Goat Island and the dedication of a restored pocket park.

On July 15, 1885 then Governor David Hill dedicated the land and created Niagara Falls State Park. Created to protect its natural beauty from the continued industrialization of the river and to allow public access to its scenery, Niagara Falls became a blueprint for public parks across the country-both state and national parks. Eight million people now visit Niagara Falls each year, making it the most popular park in the New York State Park system.

Anniversary events continue through the reminder of the year including the “History Comes Alive” program where historical figures including Annie Edson Taylor, Frederick Law Olmsted, Nikola Tesla, Father Louis Hennepin and others who spent time at Niagara Falls State Park share their stories of the park with visitors. See www.niagarafallsstatepark.com for a full listing of events.