The remains dislodged from an 18th century military cemetery at a Lake George construction site will, in all likelihood, be reinterred on the grounds of Fort George Park, say Village officials.

The Village’s Board of Trustees has adopted a resolution calling upon New York State to permit the remains to be buried at the state-owned park, said Mayor Bob Blais.

Blais said New York State officials support the proposal, although the remains will be in the possession of state archaeologists for at least a year, undergoing examination and analyses. END_OF_DOCUMENT_TOKEN_TO_BE_REPLACED 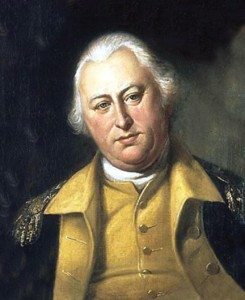 When Burgoyne’s progress stalled near Skenesborough (present-day Whitehall, NY), his supplies were quickly eaten up by his extended campaign. Since his large army could not easily live off the land, except for shooting an occasional deer or bear, or boiling up a captured rattlesnake or turtle, the 54-year old general established a long supply line back to Canada. It was anchored by Fort George at the southern end of Lake George and by Fort Ticonderoga at the northern end. Between the two forts, a supply depot, guarded by two companies of the 47th Regiment of Foot under Captain Thomas Aubrey was fixed on Diamond Island. END_OF_DOCUMENT_TOKEN_TO_BE_REPLACED