When you enter the hamlet of Wallkill, you are greeted by the happy face of the Borden Company’s mascot, Elsie the Cow. The company’s website states that this mascot dates to the 1930s.

Underneath Elsie is a sign stating that the Hamlet of Wallkill was the location the “Home Farm” of John G. Borden. Thus, many commonly believe that Borden Condensed Milk was in fact invented in the Hamlet of Wallkill; however, its origins can be traced to Burrville, Connecticut and Gail Borden, Jr. Actually, the business was not originally called Borden at all – that title would come later. END_OF_DOCUMENT_TOKEN_TO_BE_REPLACED Visitors will be able to shop at more than two dozen made-in-New York food and beverage vendors at the New York State Museum’s Taste NY Holiday Market, set for Sunday, December 8th from 11 am to 4:30 pm.

Vendors will offer samples and sales of chocolates; cheese; apple and maple products; hand-crafted beer, wine, spirits and cider; and other edible gifts. All participating vendors produce their products in New York State. There will also be a cooking demonstration, educational activities and a chocolate fountain station courtesy of We Do Fondue and Price Chopper/Market 32. Admission is free. END_OF_DOCUMENT_TOKEN_TO_BE_REPLACED

Jesse Williams, a successful farmer and cheese maker in Rome, believed that farmers could maximize their profits by working together as cooperative dairies. He started a cheese factory in the n 1851 just north of Rome, NY and helped revolutionize the modern cheese industry locally and across the nation. END_OF_DOCUMENT_TOKEN_TO_BE_REPLACED

The Rome Historical Society is set to host museum educator Patrick Reynolds for a presentation about the start of the modern cheese industry on Wednesday, May 15th at 7 pm.

Just North of Rome, at the site of the current New York State Fish Hatchery, the modern cheese industry is said to have been born in 1851. Jesse Williams was a successful farmer and cheese maker but believed by working together as cooperative dairies, farmers could maximize their profits. This led him to start what is believed to be the first cheese factory in the United States, a move that revolutionized agriculture not only locally, but across the nation. END_OF_DOCUMENT_TOKEN_TO_BE_REPLACED

This year is the 185th anniversary of the founding of the Long Island Railroad. Despite service delays and fare increases it remains the spine of Long Island and the center of its transportation network. The LIRR serves over 300,000 passengers a week with about 90 million rides a year.

The origins of the LIRR, chartered by New York State in April 1834, have a little remembered dark side. Much of the railroads early funding came from profits from Caribbean sugar produced by enslaved African labor. The key link between the LIRR, sugar and slavery was William F. Havemeyer. END_OF_DOCUMENT_TOKEN_TO_BE_REPLACED The Southampton History Museum has announced THAWfest, a local food and history weekend, set or Saturday and Sunday, March 23-24, 2019.

As part of THAWfest, Amagansett Food Institute and the Southampton History Museum will co-host a hands-on workshop with Chef Jack Formica, who will focus on foods regionally available, with a particular emphasis on living/raw foods. END_OF_DOCUMENT_TOKEN_TO_BE_REPLACED In this episode of Ben Franklin’s World: A Podcast About Early American History Rae Katherine Eighmey, an award-winning food historian, author, and cook, joins us to explore the culinary tastes and habits of Benjamin Franklin and colonial British Americans with details from her book Stirring the Pot with Benjamin Franklin: A Founding Father’s Culinary Adventures (Smithsonian Books, 2018). END_OF_DOCUMENT_TOKEN_TO_BE_REPLACED The Friends of Johnson Hall are set to offer three workshops during the month of November, all to be held at Johnson Hall State Historic Site. END_OF_DOCUMENT_TOKEN_TO_BE_REPLACED

How did early Americans go from hosting social tea parties to hosting protests like the Boston Tea Party?

Tea played a central role in the economic, cultural, and political lives of early Americans. As such, tea came to serve as a powerful symbol of both early American culture and of the American Revolution.

In this episode of Ben Franklin’s World: A Podcast About Early American History, Jane Merritt, Jennifer Anderson, and David Shields take us on an exploration of the politics of tea during the era of the American Revolution. You can listen to the podcast here: www.benfranklinsworld.com/160

END_OF_DOCUMENT_TOKEN_TO_BE_REPLACED 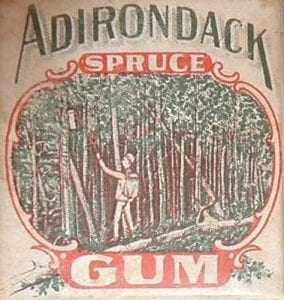 All this talk from me during the last two weeks about spruce-related subjects (Sprucelets and spruce beer) is linked to past conversations with my mom, a native of Churubusco in northern Clinton County. It’s officially known as the Town of Clinton, but to local folks, it’s just Busco — and about as country as it gets around here. Growing up there on a farm in the 1920s and ’30s, Mom partook in things that were once the norm, like drinking raw milk and chewing spruce gum.

Her repeated mention of loving to chew spruce gum intrigued me. But as a young boy, I made the mistake of thinking any old evergreen would do, so I tried white-pine sap, something I still regret to this day. Maybe it doesn’t actually taste terrible, but in my recollection, it was terribly terrible, like turpentine. To avoid steering anyone away from it based on an old memory, I confirmed through our state DEC website and others that white-pine resin can be used to make turpentine. And the higher the pitch level, the stronger the turpentine taste — so my memory is good that the taste of raw pine resin was awful. END_OF_DOCUMENT_TOKEN_TO_BE_REPLACED