The Landmark Society of Western New York has announced its 2014 Five to Revive – a list of historic sites it has determined to be in need of targeted revitalization. The announcement was made at the Landmark Society headquarters on  Fitzhugh St. in Rochester.

“The preservation efforts of The Landmark Society of Western New York continue to be focused on community revitalization,” Executive Director Wayne Goodman said in a statement to the press. “This is the second year we are announcing a Five to Revive list to call attention to key properties in western New York that are in need of investment. We can’t stress enough that these are significant historic properties whose rehabilitations can become catalytic projects for the neighborhoods and communities that surround them.” 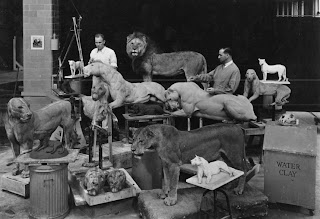 Here is a recent news item regarding the re-installation of what is believed to be “probably the world’s largest mounted fish, maybe the largest piece of taxidermy in the world” – a 73-year-old, 32-foot, mounted whale shark caught off Fire Island in 1935 and believed to have weighed about 8 tons (16,000 pounds). It has been freshly restored was unveiled at the Suffolk County Vanderbilt Museum in Centerport, where it was damaged by water leakage that closed part of the museum in 1996.

The unveiling got us thinking about the history of taxidermy in New York. According to the great wiki.

As the demand for quality leather and hides grew, the methods became more and more sophisticated. By the 1700s, almost every small town had a prosperous tannery business. In the 1800s, hunters began bringing their trophies to upholstery shops where the upholsterers would actually sew up the animal skins and stuff them with rags and cotton. The term “stuffing” or a “stuffed animal” evolved from this crude form of taxidermy.

It should be added that taxidermy got a boost during the 18th century fascination with natural science presented to the public through exhibitions of strange and exotic animals brought from distant lands and installed in cabinets of wonder, early museums, and the like.

In France Louis Dufresne, taxidermist at the Muséum national d’Histoire naturelle from 1793, popularized arsenical soap in an article in Nouveau dictionnaire d’histoire naturelle (1803–1804). This technique enabled the Muséum to build the greatest collection of birds in the world.

In the early 20th century, taxidermy began to evolve into its modern form under the leadership of artists such as Carl Akeley, James L. Clark [that’s him in the photo at the American Museum of Natural History], William T. Hornaday, Coleman Jonas, Fredrick and William Kaempfer, and Leon Pray. These and other taxidermists developed anatomically accurate figures which incorporated every detail in artistically interesting poses, with mounts in realistic settings and poses that were considered more appropriate for the species. This was quite a change from the caricatures that were popularly offered as hunting trophies.

Carl Akeley has a special place in New York taxidermy. His lifelike creations were installed in dioramas at the American Museum of Natural History in New York and can be seen in the museum’s Akeley African Hall (he also is considered the founder of a New York City staple – shotcrete).

Akeley was born in Clarendon, NY, and learned taxidermy in nearby Brockport and Rochester. In 1886 he moved to the Milwaukee Public Museum where he created one of the world’s first complete museum habitat dioramas in 1890. Akeley specialized in African mammals; rather then “stuffing” the animals he fit their skins over a form of the animal’s body.

In 1909 Akeley accompanied Theodore Roosevelt to Africa and began work at the American Museum of Natural History. In 1921 he traveled to Mt. Mikeno in the Virungas at the edge of what was then Belgian Congo to try and figure out if killing gorillas was justified. According to a Milwaukee exhibit, he eventually opposed hunting them for trophies but continued to support killing them for science and education purposes. He worked for the establishment of Africa’s first national park – Virunga (home of Dian Fossey and her famous gorilla in the mist and now under serious threat).

He was also interested in filmmaking and photography. Eileen Jones’s PhD dissertation in 2004 concluded that “representations of the African landscape and African fauna in the Akeley Memorial African Hall… were antithetical to assumptions about the impenetrable wilderness of ‘Darkest Africa’ that previously had dominated American popular culture.”

The American Museum of Natural History holds the collection of his second wife and includes photos Akeley took in Africa and films of the mountings he did at the museum. He published an autobiography, In Brightest Africa