During the American Revolution (from July 6 until August 18, 1781), the Odell House in the present Westchester County hamlet of Hartsdale served as the headquarters of Marshal Jean-Baptiste Donatien d e Vimeur (comte de Rochambeau).

Nearby fields and hills in the current Town of Greenburgh accommodated approximately 6,000 soldiers in the French expeditionary forces under his command. END_OF_DOCUMENT_TOKEN_TO_BE_REPLACED

The Fort Plain Museum is set to hold their Annual American Revolution Mohawk Valley Conference on June 11 – 14, 2020, at the Fulton-Montgomery Community College. END_OF_DOCUMENT_TOKEN_TO_BE_REPLACED

Controversy has developed involving American Revolution advocate Thomas Paine and neglect of historic sites dedicated to Paine’s memory in New Rochelle in Westchester County. This week on The Historians Podcast, New Rochelle resident and historian Jim Kaplan explains the issue. Kaplan was author of an essay on the subject in the New York History Blog. END_OF_DOCUMENT_TOKEN_TO_BE_REPLACED Following the capture of British forces by the allied armies of France and America, at Yorktown, Virginia, in the fall of 1781, the Continental Northern Army returned to the Hudson Highlands. The destruction of the principal British army in the field in the South broke England’s will to continue the struggle.

In the fall of 1782, near New Windsor, 7,500 Continental Army soldiers built a city of 600 log huts. Along with some of their family members, they braved the winter and kept a wary eye on the 12,000 British troops in New York City, just 60 miles away. END_OF_DOCUMENT_TOKEN_TO_BE_REPLACED

Over the winter of 1780-81 at this headquarters, General Henry Knox organized the artillery for the projected attack on New York City. Soldiers, at the nearby encampment, repaired and trained on the guns, howitzers and mortars.

“Mount Ellison,” the genteel combination English and Dutch-style stone house was built for prominent local merchant Thomas Ellison by an unknown number of skilled artisans and laborers between April and September 1754 under the direction of stonemason William Bull. END_OF_DOCUMENT_TOKEN_TO_BE_REPLACED 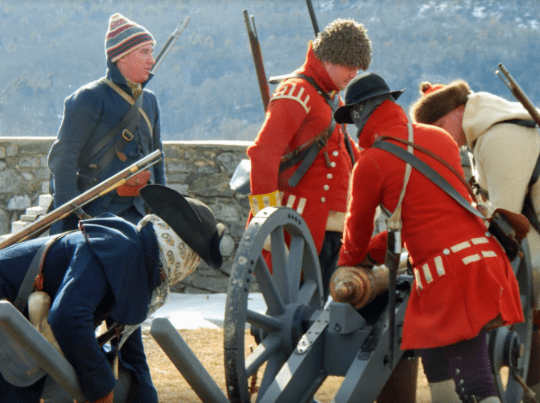 Fort Ticonderoga has announced their next Winter Quarters living history event, Preparing for the Coming Campaign has been set for Saturday, January 18, 2020. The event will bring to life the story of American soldiers at Ticonderoga in the year 1777 as they prepare for a British attack. END_OF_DOCUMENT_TOKEN_TO_BE_REPLACED

On April 18, 1775, Paul Revere rode to Lexington, Massachusetts to spread the alarm that the Regulars were marching. Revere made several important rides between 1774 and 1775, including one in September 1774 that brought the Suffolk Resolves to the First Continental Congress in Philadelphia.

So why is it that we remember Paul Revere’s ride to Lexington and not any of his other rides?

END_OF_DOCUMENT_TOKEN_TO_BE_REPLACED In honor of Martin Luther King, Jr. Day, Old Fort Niagara in Youngstown is set to host a walking tour that illuminates the African-American history of the fort on Monday, January 20th.

The tour will be led by Executive Director Robert Emerson, who will discuss slavery in New France and the story of Richard Pierpoint, a black loyalist during the American Revolution; New information on the 24th Infantry Regiment that was posted at Fort Niagara in 1908-1909; and the life of Hubert Crawford, the African-American artist, who painted the mural “Lions of Cantigny” at the Fort Niagara Officers’ Club in the late 1930s. END_OF_DOCUMENT_TOKEN_TO_BE_REPLACED