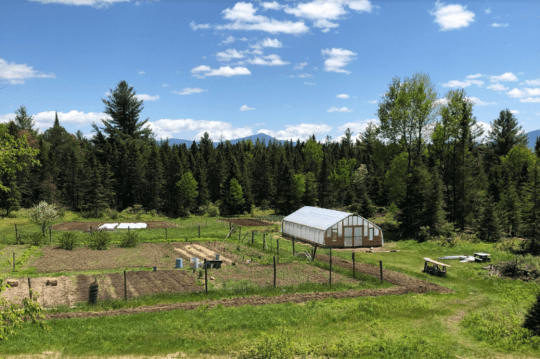 The Saranac River Basin and the farms located within it have a rich agricultural tradition that stretches back generations. The Adirondack North Country Association (ANCA) invites Bike the Barns participants to engage with the region’s agricultural heritage through interpretive exhibits and farm tours at its fourth annual farm-by-bike event.

“We’re thrilled to dig a bit deeper with this year’s event into some of the fascinating history of the region’s farming communities. Riders will learn about the rich connections between human culture, wilderness, independence and working landscapes,” said Josh Bakelaar, ANCA’s Local Economies and Agriculture Program Director, in an announcement sent to the press. “We extend a warm invitation to cyclists of all abilities to come learn about the past, see the present and ponder how we can work together to shape our agricultural future.”

Sanctuary Farm, the event’s lunchtime farm stop, offers insight into local African American history that is tied to social justice issues that remain today. The Vermontville farm is now owned by Denise Griffin, who operates a market garden on the land. But long before Griffin’s grandparents managed the property, the plot of land was farmed by John Thomas, who was formerly enslaved.

Black pioneers like Thomas who acquired their land in the Adirondacks from the land magnate and radical abolitionist Gerrit Smith used their improved land to obtain access to voting rights. From 1821 to 1870, suffrage rights were withheld from black men (among others) in New York unless they could show they owned $250 in real property.

Bike the Barns riders will gain a broader perspective of Thomas’s story by viewing a display from the John Brown Lives! “Dreaming of Timbuctoo” Exhibition and materials produced by exhibit curator Amy Godine.

“John Thomas’s farm represents a convergence of so many progressive movements,” Godine said. “It expressed a dream of black agrarian economic independence. It was part of an unprecedented experiment in environmental distributive justice. It proved the healing power of a place-based equalitarian rural community. And all this in the 1840s, well before the Civil War. We’re so lucky it’s part of our heritage, and that we have this place to visit and appreciate.”

Martha Swan, executive director of John Brown Lives!, will provide interpretation and orient riders to what was called in the mid-1800’s a “scheme of justice and benevolence.” Don Papson, founding president of the North Country Underground Railroad Historical Association and North Star Underground Railroad Museum, has done extensive research on Thomas and his descendants and will discuss how their story fits into the region’s larger historical context.

Historic Saranac Lake will showcase its Cure Porch on Wheels at the Bike the Barns finish at Tucker Farms, a potato operation and agritourism site that has been worked by five generations of the Tucker family since at least the 1870s. The Cure Porch contains a Story Phone where participants can listen to recorded interviews or record their own stories.

Six Nations Indian Museum in Onchiota will open its doors for the day to accommodate riders along the three longest bicycle routes. The nationally recognized museum features thousands of artifacts with an emphasis on the culture of the Six Nations of the Iroquois Confederacy, which include the Mohawk, Oneida, Onondaga, Cayuga, Seneca and Tuscarora. Displays include information about Indigenous farming methods and contributions to modern agriculture.

Riders are invited to and visit other points of interest along the routes including Harmony Hills Farmstead, Hex & Hop Brewing, Moonstone Farm and Mountain Meadow Market. Participants are also encouraged to allow time to explore the Great Adirondack Corn Maze at Tucker Farms.

Registration for Bike the Barns is still open online.

The cost is $80 for the longer routes of 30, 40 and 70 miles and includes lunch, dinner and a t-shirt. The 10-mile short route costs $60 and includes dinner. T-shirts can be purchased separately by short route riders and other Bike the Barns supporters.

All proceeds from Bike the Barns go to the FarmShare Fund, which helps support and promote a sustainable and equitable regional food system. Goals of the fund include building connections between farms and consumers; addressing food security in the region; supporting ANCA’s existing local food initiatives like farm to school, food hub development and agritourism efforts; and supporting local food projects of regional partners.

Photo of Sanctuary Farm in Vermontville, once owned by John Thomas, provided.