During the first half of the 20th century, traveling basketball and baseball teams were part of America’s social fabric, providing great entertainment for millions of appreciative fans. Mostly visiting cities and surrounding communities, the famous and near-famous made the rounds each year. Their competition consisted of locally organized squads that often recruited one or more talented college or semi-pro players.

In New York, the most popular routes for traveling teams were from New York City north to Albany, and west to Buffalo. It was uncommon to find nationally known stars straying from those paths to visit the state’s northernmost regions, but in 1934 — 85 years ago this week — Plattsburgh and other lucky sites played host to sports royalty in the person of Mildred “Babe” Didrikson. At the very least, she was the equal of most men in several sports. Invariably, she is listed among the greatest female athletes of the 20th century. Compilations, like this one by Sports Illustrated, usually place her at the top among athletes who specialized in single disciplines, but when it comes to all-round talents and achievements, there are few if any challengers to Didrikson.

Read this brief ESPN account and you’ll be stunned at the quality and variety of her achievements. Frequently singing her praises was a contemporary, Grantland Rice, considered one of America’s greatest sportswriters. In 1944, Rice detailed a few of her abilities. At five feet five and 120 pounds, Babe, he said, could “Drive a golf ball from 260 to 290 yards and hit a 3 iron well over 290 yards; throw a baseball 315 feet, on a par with any good big-league outfielder; run, jump, and chuck the javelin in record time and measurements [as she proved in the 1932 Olympics]; carry a football through a good line and throw a forward pass accurately 50 yards; swim and dive within a fraction of championship standards; hit a tennis ball harder than Helen Wills or Alice Marble; is a good rifle shot and a good horsewoman….

“All in all, we once figured out 16 sports in which she excelled, proving 12 of these in motion pictures that were all carefully and accurately made…. She is beyond all belief until you see her perform. Then you finally understand that you are looking at the most flawless section of muscle harmony, of complete mental and physical coordination, the world of sport has ever seen.”

It was a rare event indeed when that level of talent could be viewed in person by folks in far northern New York. In 1933–34, she was touring several states with her basketball team, Babe Didrikson’s All-Americans (Babe herself was previously an AAU [Amateur Athletic Union] All-American and national champion). Besides the usual stops from Syracuse to Albany, a loop of northern New York was added to their itinerary.

After defeating Carthage’s Firemen and Malone’s National Guard team, the next stop was Plattsburgh. On the military base there, Plattsburgh Barracks routinely hosted sporting events, sometimes featuring major stars, but nothing the likes of what was scheduled for late January 1934. Appearing the same night were Babe’s team and Paul Berlenbach, a former national champion wrestler and former world champion light-heavyweight boxer.

While Berlenbach wrestled that night and lost to Plattsburgh’s 26th Infantry middleweight champion, Babe as usual wowed a packed house with her performance against the Post’s talented basketball quintet. On this tour, she was the only girl on the team, sharing equal playing time with the men while posting a record to that point of roughly 70 wins against 8 losses.

As one can imagine, many teams were out to prove themselves the better of any woman, let alone a famous athlete and Olympian. During an interview, a reporter asked if opponents took it easy on her, to which Babe replied, “You wouldn’t think so if you saw the bruises I receive.” Although hardly their equal physically, she made up for it in other areas. After a great performance by her at Fort Plain, New York (near Johnstown), a reporter wrote, “Of course, the ‘Babe’ was the big show. Aside from lacking the necessary beef and brawn, Babe was as clever a basketeer and faster than any man on the floor.”

The same held true at Plattsburgh, where her All-Americans trounced a strong Barrack’s team. Two newspaper accounts by admiring reporters in attendance are worth a look.

From the Plattsburgh Daily Republican: “Babe Didrikson, the world’s greatest woman athlete, made her debut in Plattsburgh sports last evening when she headed her All-American team to a 46 to 24 victory over the 26th Infantry quintet in the Post gymnasium before a crowd estimated at 1,500 people. Babe was the spotlight of the basketball game, and wherever she moved on the court, all eyes followed her. She played nearly three full quarters of the game and scored eight points. Many of the shots she took rolled around the rim of the basket and out again.

“Moving about the hardwood like a breeze, the lithe miss from Dallas, Texas, demonstrated why and how she was the class of the feminine field at the 1932 Olympics. A natural athlete and a natural ballplayer is the young lady who hurdled and jumped her way into the center of the sports stage two summers ago. Miss Didrickson put the ball through the netting four times, the first one being a long one, the next two short shots from under the basket, and the final one a difficult, one-handed shot from the side of the court.

“During the first period, the girl athlete ran Fitzgerald, the 26th Infantry team’s guard who was playing the little Miss, ragged. Delaney was sent into the game during the second period to relieve Fitz, and Miss Didrikson kept him busy chasing her during this period.

“When Miss Didrikson entered the game in the final period, she was guarded by Kraus, the six-foot-four-inch giant of the Post quintet. She immediately made life miserable for the blushing Kraus … proceeded to steal the ball from him, and then to climax her humiliation of the giant guard, she knocked him to the floor in a scramble for the ball.” 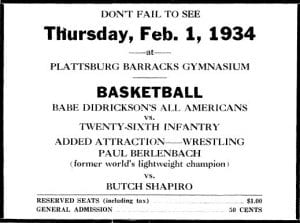 From the Plattsburgh Daily Press: “Mildred ‘Babe’ Didrikson, the women’s track and field star of the 1932 Olympics, was naturally the star attraction in the basketball game, which was likewise naturally won by the All-Americans. Gifted with unusual speed, Miss Didrikson sped about the court for fully three periods of the game, and when she was not necessitating the doughty little soldier veteran, Fitzgerald, to tire himself out chasing her, she was slipping twin-pointers through the basket.”

Babe tied with her team’s center for second-high scorer of the night. Leading the Post were three players with six points each. Fitzgerald, who guarded Didrikson, failed to score. Kraus made two foul shots.

It’s a good thing Babe had stamina, for the tour was grueling. There were slower modes of travel in the 1930s, plus the physical toll of playing three to five games a week, and the disadvantages of being nearly a foot shorter and 80 pounds lighter than many of her opponents. After a game in Syracuse, she was asked if she liked playing against basketball professionals. “I do … for the money in it,” said Babe. The tour certainly was lucrative, earning for her an estimated $1,000 a month, equal to about $18,300 in 2019. As for training, she had a simple system: “Eat what you want and when you want it, but get lots of sleep.”

Despite her special and varied talents, there were few opportunities for women in sports—nearly all were the domain of males. One noted exception was golf, which Babe had played, enjoyed, and claimed to be improving at with scores in the 80s. So the basketball champion and track and field champion turned much of her attention to competitive golf, and in her second year won the Texas Women’s Amateur Championship. A day later, the United States Golf Association tagged her a professional athlete (having been paid in other sports) and banned her from competing in golf.

She played exhibitions and did many other things until finally being granted amateur status in the early 1940s. Nearly ten years of a potentially fantastic career had been lost by the ruling, but after World War II ended, Babe made up for it in a hurry. Records vary, but she reportedly won 16 tournaments in a row and then turned professional. That worked out pretty well, too. Between 1948 and 1953, she played in 128 events and won 31 times, even while battling the cancer that eventually took her life. Included in her wins were ten majors, the last coming in the 1954 US Women’s Open while wearing a colostomy bag. Known for her exceedingly long drives, she accounted for such power with a favorite saying: “I just loosen my girdle and take a whack at it.”

Didrikson died in September 1956 at the age of 45. Millions, men and women alike, shared the pain of losing an inspirational figure and admired sports hero at such a young age. Her name pops up, inevitably and justifiably, whenever sports talk turns to “greatest athlete” discussions. She was the best at several sports and among the best at many others. Lucky are those who witnessed her tour of the North Country in 1934, when a woman of average height stood shoulder to shoulder with the tallest of men.