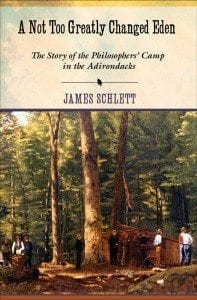 In 1858 some of the leading lights of American art, literature, and science camped together on Follensby Pond near Tupper Lake at what is now known as the Philosophers’ Camp.

The gathering was organized by Willam James Stillman, artist and editor of acclaimed art magazine of the time, The Crayon. It included transcendental philosopher Ralph Waldo Emerson, the poet James Russel Lowell, Harvard scientist Jean Louis Agassiz, and others.

The meeting at Follensby was widely covered in the popular press of the time and fueled an interest in the Adirondacks and retreating into the wilderness to write, make art and discuss the issues of the day.

A new book by journalist James Schlett, A Not Too Greatly Changed Eden: The Story of the Philosophers’ Camp in the Adirondacks (Cornell University Press, 2015), documents the history of the camp and its influences in the development of American culture.

Schlett focuses the book on William James Stillman, the organizer and motivating force behind the camp. Stillman was an accomplished artist who sought out the region for its primitive character and pristine beauty as a place for both individual inspiration and shared experience. The book charts the development of the Philosophers Camp phenomena from its conceptualization and the stays at Follensby in 1858 and 1859 through to the dramatic changes in the landscape and to the individuals involved as the United States developed in the late 19th century.