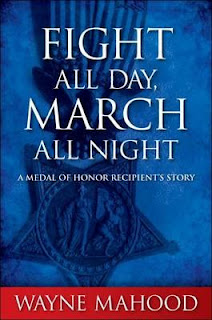 In 1862 twenty-one-year-old Morris Brown Jr. left his studies at Hamilton College to take up the Union cause. He quickly rose in rank from sergeant major to captain and acting regimental commander for the 126th New York Volunteers. Fight All Day, March All Night: A Medal of Honor Recipient’s Story (SUNY Press Excelsior Editions, 2012) is the narrative of a young Civil War officer, as told through his letters from the battlefield and edited by Civil War historian Wayne Mahood.

In letters written to his family in Penn Yan, New York, Brown describes his experiences at war: the unseemly carping between fellow officers, the fear that gripped men facing battle, and the longing to return home. Brown’s letters also reveal an ambitious young man who not only wanted recognition but also wanted to assure himself of a financial future.

Few Civil War soldiers were as articulate as Morris Brown Jr., fewer served in a regiment that saw so much combat, still fewer commanded a regiment at such a young age, and even fewer were recognized by the newly minted Medal of Honor.  The 126th New York was raised in Ontario, Seneca and Yates counties and was organized at Geneva.

Wayne Mahood is Distinguished Service Professor Emeritus in the School of Education at Geneseo–SUNY. His many books include Alexander “Fighting Elleck” Hays: The Life of a Civil War General, From West Point to the Wilderness, General Wadsworth: The Life and Times of Brevet General James S. Wadsworth, and Written in Blood: A History of the 126th New York Infantry in the Civil War.