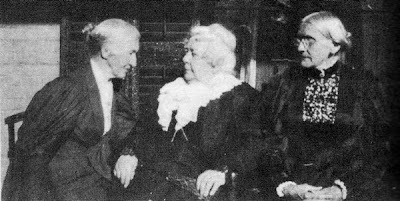 In the spring of 1851 Elizabeth Cady Stanton and Susan B. Anthony were introduced to each other on a street corner in Seneca Falls NY. Immediately drawn to each other, they formed an everlasting and legendary friendship. Together, they challenged entrenched beliefs, customs, and laws that oppressed women and spearheaded the fight to gain legal rights, including the right to vote, despite fierce opposition, daunting conditions, scandalous entanglements, and betrayal by their friends and allies. Penny Colman weaves commentary, events, quotations, and personalities into her new book Elizabeth Cady Stanton and Susan B. Anthony: A Friendship That Changed the World and into her program on the two famous women’s rights activists.
At 2 p.m. on Saturday, August 27 Colman will be discussing and signing her new work at the Gerrit Smith Estate National Historic Landmark, 4543 Peterboro Road, Peterboro NY. Colman will highlight the friend ship between Stanton and her cousin Gerrit Smith of Peterboro, whom she once called “the sage of Peterboro.” Stanton spent summers in Peterboro in the 1830s and it was during these visits that she met Henry Brewster Stanton and he proposed marriage to her. Smith’s daughter Elizabeth and Stanton were close friends with each other and with Anthony.

Author Penny Colman writes about illustrious, but not typically well-known, women and a wide range of significant and intriguing topics in her books for all ages: Rosie the Riveter: Women Working on the Home Front in World War II, Corpses, and Thanksgiving: The True Story. She has taught nonfiction literature and creative writing at colleges and universities, including Ohio State University, Queens College, the City University of New York and Teachers College, Columbia University. She lives in Englewood, New Jersey

The Colman program is the one of two Peterboro programs observing Women’s Equality Day on August 26. At 2 p.m. on Sunday, August 28 at the National Abolition Hall of Fame and Museum, 5255 Pleasant Valley Road, Carol Faulkner Ph.D. will discuss her new book Lucretia Mott’s Heresy: Abolition and Women’s Rights in Nineteenth-Century America.

Admission to both programs is two dollars. Stewards and students are free. The Gerrit Smith Estate National Historic Landmark and the National Abolition Hall of Fame and Museum are open from 1 – 5 p.m. on Saturdays and Sundays from May 14 to October 23 in 2011.