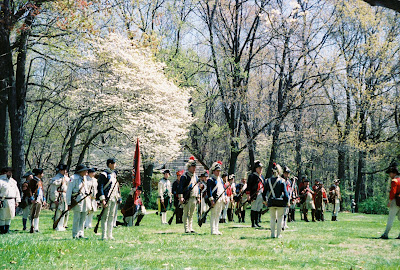 New Windsor Cantonment State Historic Site will host a weekend of Revolutionary War military firing demonstrations and period activities on Saturday April 16, 10 AM – 4:30 PM and Sunday April 17, 1 – 4:00 PM. The event is presented by the Brigade of the American Revolution, an international organization dedicated to recreating the life and times of the common soldier of the War for Independence, 1775-1783.

A battle demonstration takes place at 2:00 PM each day with colorfully uniformed soldiers firing muskets and maneuvering to the music of fifes and drums. The soldiers will also set up tents, prepare cooking fires and demonstrate other aspects of 18th century life. For more information please call (845) 561-1765 ext. 22. Admission is free.

At 3:00 PM, on Saturday April 16, historian Norm Fuss will present a talk on The Battle of Great Bridge: the South’s Bunker Hill. At 3:00 PM, on Sunday April 17, historian Barnet Schecter will give a talk on his latest book George Washington’s America: a Biography through His Maps. After the presentation he will have copies of his book for sale. At 10:15 AM on Sunday April 17, Norm Fuss will give a presentation on Surviving Military Uniforms in North American Repositories. At 12:30 PM, on Sunday April 17, Eric Schnitzer, Park Historian, Saratoga National Historical Park, will present A primer to using artwork for living history clothing documentation. All lectures are open to the public. Members of the Brigade of the American Revolution use this weekend to teach the latest knowledge in recreating life from that era. The presentations are an enjoyable experience, something to be long remembered. Through lectures and demonstrations, a wide variety of 18th century period life is revealed. New Windsor Cantonment site staff is present to perform blacksmithing, woodworking and military medicine Saturday April 16, 10 AM – 4:30 PM and Sunday April 17, 1 – 4:00 PM.

The New Windsor Cantonment is co-located with the National Purple Heart Hall of Honor at 374 Temple Hill Road, Route 300, in the Town of New Windsor, four miles east of Stewart Airport and three miles from the intersection of I-87 and I-84 in Newburgh, New York.

Photo: Brigade of the American Revolution.