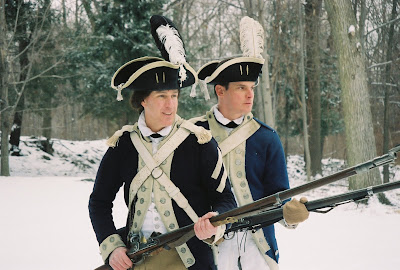 During the winter of 1782-83, the soldiers of the northern Continental Army anxiously waited, in New Windsor, for news of the peace treaty. Though peace might be announced, Washington still ordered his soldiers to train for battle. On Sunday February 20 from 1:00 to 4:00 PM and Monday February 21, from 10:00 AM to 4:00 PM, on Presidents’ weekend, soldiers will bring to life the Continental Army’s final winter encampment with musket and cannon firings, blacksmithing, medical demonstrations and other aspects of daily life at New Windsor Cantonment State Historic Site in Newburgh.

On Sunday at 1:30 & 3:30 PM and Monday at 11:00 AM, 1:30 & 3:30 PM see muskets and cannon fired. Following these firings, children enlist in the Continental Army, drill with wooden muskets and get paid in Continental currency for their service. New Windsor Cantonment State Historic Site is co-located with the National Purple Heart Hall of Honor on Route 300, 374 Temple Hill Road, in New Windsor, NY, just three miles south of the intersection of I-87 and I-84. For more information please call (845) 561-1765 ext. 22.

Following the capture of British forces by the allied armies of France and America, at Yorktown, Virginia, in the fall of 1781, the northern Continental Army returned to the Hudson Highlands. The destruction of the principal British field army in the south broke England’s will to continue the struggle. In the fall of 1782, near New Windsor, 7,500 Continental Army soldiers built a city of 600 log huts near New Windsor. Along with some of their family members, they braved the winter and kept a wary eye on the 12,000 British troops in New York City, just 60 miles away.

Photo: Continental Army Soldiers Michael McGurty, from Montgomery, in front and Grant Miller, from New Windsor, in back, Drill in the Snow.