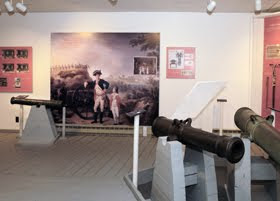 The Friends of the State Historic Sites of the Hudson Highlands (FSHSHH) will gather for their Annual Meeting at the Temple Building at New Windsor Cantonment on Saturday, April 17th at 2pm. Following the brief meeting, this year’s program will include a presentation on “The Highland Adventures of William Thompson Howell.”

New Windsor Cantonment State Historic Site is where the Continental Army under General George Washington spent the last winter and spring of the Revolutionary War. In October 1782, General Washington moved his northern army to New Windsor to establish winter quarters. Some 7,500 soldiers and 500 women and children civilian refugees encamped here. By late December 1782, they had erected nearly 600 log huts into a “cantonment,” a military enclave.

Nearby, John Ellison’s Georgian-style house in Vails Gate served at the military headquarters of Major General Henry Knox, Commander of the American artillery in 1780-81, and then as headquarters for General Horatio Gates, commandant of the New Windsor Cantonment in 1782-83. And in Newburgh, during those critical last months of the war, General Washington made some of his most important contributions to shaping the American republic at his headquarters in the Jonathon Hasbrouck House, the first publically owned historic site in the nation.